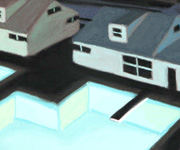 iNET’s absolute dedication to custom and creative genius inspired graphic design has the team on a constant vigilant watch for design inspiration. In summer 2008, the iNET team went looking for visual inspiration where other inspired people hang out. The graphic design staff, many of the sales staff and a number of administrative employees took a field trip to Milwaukee’s lakefront and The Milwaukee Art Museum LakeFront Festival of Arts. The trip was the first exposure a number of the iNET graphic designers had to the festival. One field trip requirement for the web design staff was bring back visual design inspirations. As any art aficionados will testify, exposure to art is a great way to build an appreciation. With the high level of customer expectation for perfectly representative website graphic design literally contributing to their profitability via the visual appeal of their web marketing platform, Milwaukee's premier art event turned out to be a great place to look for 'off the beaten path' inspiration. 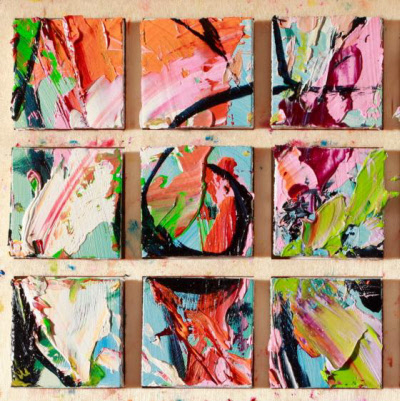 As fate would have it, Milwaukee's LakeFront Festival of Arts decided to bring the silent art auction into the 21st century for 2009. The art auction is a very cool feature of the Milwaukee LakeFront Festival and an opportunity for show attendees to maybe pick up a cool piece of art while supporting ‘The Arts’ in Milwaukee. Everyone involved wants to see people buying art while supporting the festival. iNET has developed an internet auction website allowing site visitors AND art festival attendees to bid on silent auction items. The implications for the charitable donation facet of the art silent auction are huge. LakeFront Festival of Arts silent auction bidders had to be at the festival to bid in years past. With the new iNET art auction, website bidders will be able to bid at the Festival and then again when they get home or anywhere with Internet access up to 3pm the day the festival closes. The iNET designed and developed art auction website will notify high bidders when they are outbid via email. A person who bid the first hour of the art festival is much more likely to bid again than they were in years past. Everyone involved in the auction is hopeful this year, the auction website will help to bring a new level of charitable donation to the LakeFront Festival of Arts through the Silent Auction.

The LFFA auction site truly is creative genius inspired Waukesha graphic website design. iNET website designers incorporated the Milwaukee LakeFront Festival of Arts 2009 poster art to the site design, achieving a unified marketing presence with the Milwaukee Art Museum website. Apart from the poster art, the site is a unique design concept. Applying unparalleled web design expertise, iNET created a feature packed custom art auction platform site users will easily navigate with entertaining aspects making bidders want to come back. An Ajax ticker display gives site visitors real time updates on interesting auction facts like; what auction has the highest bid… What auction has the most bids and what auction has the most recent bid. The auction website will allow site users to check back and see what their item’s current high bid is. Who doesn’t want to know what something they bid on eventually sells for? What artist isn’t curious about how their donated artwork did for charity? The iNET produced LakeFront Festival of Arts Auction website even has a running total of high bids. In one glance, viewers will know how the site is doing in raising charitable donations.

With a full eCommerce solution, the auction site also allows the Milwaukee LakeFront Festival of Arts to put T shirts, mugs and other festival related memorabilia for sale to the general public. Utilizing iNET's exclusive online content management system, Site Edit, LakeFront Festival of Arts can upload new products and current website content without additional assistance or cost from iNET Web.  With the site being available to visitors across the world, the auction now has the potential to reach art buyers anywhere with internet access. Maybe this year, people who just love certain artists but who are not from the area will bid. Art aficionados and Milwaukee Art Museum supporters who simply can't make the festival now have the ability to participate.

Since the art auction depends completely on the donation of art from participating artists, iNET built the website with 'giving value back' to the artist’s in mind. Each auction features images of the donated artwork, artist biographies, links back the artist’s own website and pertinent information from the artist. The intention of the Milwaukee LakeFront Festival of Arts administrators to keep the site up all year makes participation in the auction not only a great way for artists to give back, it is now an opportunity to get something important for themselves. A link from a major website like this one will help individual artist websites to climb in value establishing a greater presence for their own web marketing. In making the site a high value proposition for the artist, our goal is to create the highest level of participation with the highest level of donated artwork. With 2009 being the 45th anniversary of the art festival, it is certain; in the long term, making this auction website an advantage for the artists is going to help the Milwaukee Art Museum.

Being a dual faceted technology company, iNET is proud to be delivering both a website auction solution AND a computer hardware - bid, entertainment and support system for the Milwaukee LakeFront Festival of Arts. iNET is providing bidding stations where Festival attendees will be able to set up an account and bid. iNET is also providing two large screen auction site statistic display boards. The web design team has developed a leader board. In a large screen format auctions will be displayed for festival goers to see what art is getting the most bids and the most attention. The graphic user interface display boards will update on a constant basis during the Milwaukee LakeFront Festival of Arts. Not only is this an entertaining feature, our hope at iNET is the little reminders of what is hot will encourage full scale bidding wars, thereby achieving the highest possible final bid price on behalf of Milwaukee’s Friends Of Art.

If you love art, please consider taking a trip to Milwaukee’s LakeFront Festival of Arts. With great weather on tap, what better place to be with dad on Father’s Day? If you can’t make the Art Festival, please consider doing the next best thing; Bid on a piece of art, thereby contributing to the arts in Milwaukee AND getting something super cool for your home or as a gift (for dad?). If you need cutting edge website functionality, contact iNET. Whatever you can imagine we will make happen on the Internet.

If you can make the art festival this year, please stop by and say, "Hi," to the iNET team.