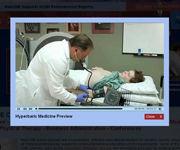 "There was a real lack of professionalism and competence with the two web developers we had been through. Communication was a huge factor. With the other web guys, just getting them to call us back took days. We were kept in the dark." In defense of the second tier web developers (even though their behavior is indefensible, iNET tries to be charitable when evaluating our "competition"), the functionality of the WebCME website is incredibly complex, beyond the capabilities of all but a handful of web development companies in the world. WebCME literally spent two years working with second tier web developers eventually firing them both and coming on board with iNET Web. Getting it done in THREE MONTHS, which is when WebCME needed their website, after the setbacks and delays incurred from working with lesser web developers, was an insane promise no web development company in their right mind would make...unless they were INSANELY talented, creative genius inspired custom Waukesha website development masters…unless they were iNET Web!

The entire WebCME platform is video courses medical professionals take at their leisure anywhere they can access the Internet throughout the world and earn valid CME and CEU credit. Simple concept out of the reach of most website developers abilities.

What makes the WebCME website programming so complex is how EASY the website makes it for people with no computer expertise to create and sell online continuing medical education courses, complete with videos, tests, multi-user accounts and much more. Kate Baker, Director of Operations at WebCME says, "I love that as a completely computer illiterate person, I can go in the backend of the website and change things and feel comfortable in doing so. I don’t have to rely on a tech savvy person to make the changes that I want."

When doctors, nurses and physical therapists find WebCME on the first page of Google after doing a search for "wound care CME", "hyperbaric CME", or other online CME related terms, they instantly know they have found a company on the cutting edge of online medical education. Dr. Niezgoda, founder of WebCME, greets them personally in a green screen walkout video. Website viewers are naturally drawn to the band of website videos running horizontally across the screen…the video band scrolls in an infinite loop when scrolled over by the mouse, until the website user pauses over a video, in which case, the video conveyor stops, and a sample clip from the video starts playing. If viewers want to see more, they can click the "view preview" button below each video to see a full resolution preview of the online CME course. This incredible caliber of online video functionality, totally unique to WebCME, lets users know WebCME is an online CME platform backed by an incredible website infrastructure capable of delivering information in any format needed. Instant Customer Confidence, is the reason iNET puts so much effort into creative genius inspired website graphic design and web development.

As WebCME develops and adds more online CME and medical CEU courses, it will become known as the finest source of online continuing medical education in the world, revolutionizing the way continuing medical education is administered. As more and more iNET Web customers rise to the top of their industries, backed by the force of creative genius inspired Milwaukee website design and development, it is changing the way the Internet is seen, as more and more people realize the limitless possibility of what the World Wide Web can do for business, consumers, and the world at large.

If you are a medical professional looking for ongoing medical education credit, login to WebCME right now and get started. If your business has struggled even to get in contact with your web developer and production seems to be in an endless loop contact iNET. iNET WILL get your website done, with superior graphic design, running to the top of free search engine queries, packed with custom functionality that WILL make your business more profitable!