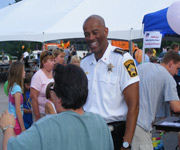 INET Web’s creative genius inspired branding team introduced the term “the people’s sheriff” as a symbol to represent his prominent status in the community and his consistent position as sheriff. By using this phrase in the logo and throughout the website, this slogan rings in citizen’s minds and makes it memorable for when the Milwaukee County Sheriff Election Day arrives. David Clarke’s website is an excellent public platform with an appealing edge to do more than attract votes.

The Milwaukee County sheriff election is a resilient course David Clarke is willing to take and iNET Web’s web design team is coming along for the ride. Taking notes from our ever-growing Milwaukee web design portfolio, we rendered a dynamically changing background and content blocks varying as you scroll around the page. This design showcases Sheriff Clarke in various aspects of his position and various outlooks on different positions including his community outreach. His vibrant website was made available across all browsers including tablets, apple browsers and more using the best practices of our Milwaukee web design team. The common site user is more attentive to websites with moving animation and it’s what sets iNET apart from competitors in terms of design and functionality.

Throughout the Milwaukee County sheriff election, David Clarke’s logo will be featured on yard signs, t-shirts, billboards and other propaganda to publicize his run for election and stances. Our iNET creative genius inspired web designers generated a vector graphic for the sheriff's logo to ensure the logo can be used throughout his campaign. This innovative logo can be stretched in a variety of sizes without losing its image quality or resolution. The logo has a distressed appearance associated with his tough persona to fight crime. The badge located inside the ‘C’ of David Clarke’s last name is iconic for his strong character and was designed to also stand alone. INET Web’s Milwaukee web design team also created a red, white and blue color scheme representative of America to connect David Clarke with his community. Sheriff David Clarke chose iNET Web to educate the public about his stances in the Milwaukee County sheriff election. He wasn’t disappointed and you won’t be either.

Contact our Milwaukee website design team for more information on how we can create or enhance a visually powerful and engaging website to increase your return on investment today.