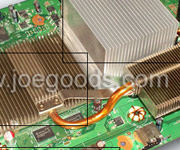 Joe Goods is a world class repairer of video game systems and home electronics, as well as a retailer of new and refurbished electronic goods.

Before Joe Goods found iNET WEB, they had a website design and development nightmare, similar to many that iNET Web hears from companies needing rescue from unscrupulous or incompetent Milwaukee website design firms. Joe Goods had paid a national web design company a thousand dollar down payment to create a website for their X-Box 360, Playstation 3, and Nintendo Wii repair services. After four months of watching video game system repair competitors grow in web stature, with no results from their hot shot national web design firm, Joe Goods started looking for a Milwaukee web design and development company who delivers on promises.

When Joe Goods first spoke with the iNET website developers, they could feel the passion iNET brings to every project. Joe Goods knew they had found a Waukesha web development company responsive to client needs. Two months later, Joe Goods had an eye-catching, world class website presence worthy of their electronic repair skills, with amazing features, graphic elements and Flash animations making them stand out above their video game system repair competitors.

iNET Web created several impressive graphic features for the Joe Goods website to help inform customers and establish Joe Goods as a first class X-Box 360, Playstation 3, and Nintendo Wii repair shop. One Flash animation walks customers through the simple, five step process of getting a video game system repaired by Joe Goods. Another custom created iNET website rollover graphic shows the interior of an X-Box 360. By moving the cursor over outlined parts, an information box appears describing each part’s role in running the X-Box 360. Unlike most web images, the text in this feature remains visible to search engines giving it value within an elegant graphic solution. Take a look at this fun, interactive feature, and you immediately get the sense the X-Box 360 repair technicians at Joe Goods know what they’re doing.

The process of establishing what is wrong with a video game system, purchasing repair services, and arranging for it to be shipped (all online, without speaking to a person), creates unique challenges in website infrastructure. iNET Web designed a custom shopping cart with UPS shipping module, perfectly streamlining the process, making it a breeze for Joe Goods and their video game system repair clients. Unlike second tier Milwaukee web design companies who cram clients into canned, one size fits all solutions, iNET Web creates custom solutions, perfectly addressing the unique web design challenges experienced by each iNET Web customer. Joe Goods also has custom iNET Web backend database edit capabilities allowing them to update text, pictures, and products without any web development expertise, and without paying any website updating fees. With a lesser website solution, Joe Goods would have to pay for every change they need made on the website, and with all the refurbished electronics products rotating through Goods online stock, the website costs would be astronomical.

To see what a world class, iNET Web custom created website solution looks like, go to JoeGoods.com. Once you’ve seen Joe Goods’ website, you won’t go anywhere else for your video game system and home electronics repairs, and you won’t work with any Milwaukee website design and development company but iNET Web.