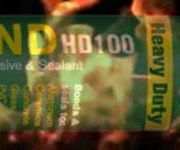 The ECO-BOND team put their trust in iNET Web to deliver a website masterpiece visually defining ECO-BOND with a graphic interface, adding legitimacy going into a marketing meeting with one of the largest retail hardware stores in America. The ECO-BOND team closed the deal! While the website was only one very modest piece of the puzzle, it has to be considered a contributing factor.

iNET Web started the website layout with a top-of-the-line website graphic background, subtly telling the website viewer ECO-BOND is environmentally friendly. The ECO-BOND team, in our pre-development meeting, stressed repeatedly that ECO-BOND is effective below freezing temperatures, as well as under water and at 400 degrees! The iNET Web website design graphic animation team set out to make an online website Flash animated visual, leaving no doubt as to the capabilities of this incredible, environmentally friendly adhesive. After conceptualization, the graphic animators at iNET Web hit a visual grand slam home run with the upper right hand corner Flash animation. With few words and Custom Creative Genius Inspired website graphic design iNET defined ECO-BOND with an image piece literally impressive enough to be used 'as is' in a Super Bowl ad. It's that good!

Green Adhesive Rakes in the GREEN with iNET Web Marketing

ECO-BOND has done just a little web site search engine maximization with iNET Web. Even so, the website has scored high marks in native search engine queries for environmentally friendly and green adhesive products on Google and Yahoo. So high, in fact, that ECO-BOND, who had set out to simply have a great web site marketing presence, has been forced to add and eCommerce website solution to the website a little more than a year after the initial launch! The websites online shopping cart is being customized right now by the one and only Milwaukee website designers and developers. The ECO-BOND team just asked what it would take to add the ability to process transactions in Canadian currency on the website! While they are a young company, it looks like as a bright GREEN future.And luckily for them, iNET WEB is the Milwaukee website designers and developers with the creative genius abilities to make these above average website features possible.

Have a look. Check out the custom graphic website navigation. If you are going to bond anything, why not do a little good for the environment?... Use ECO-BOND. it is incredible stuff! While Eco-Bond has stopped using iNET Web's custom solution this website design and development project is a huge success with website design integrity that stands above the rest!

Contact the top Milwaukee Web Design Company and take your business to the next level with a creative genius inspired website.