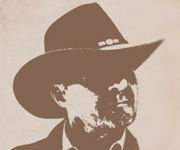 Of his iNET produced custom website, Paul says he gets positive comments regarding the design all of the time. Paul loves the unique feel of the site and the fact that you know what the site is about visually the second you land in it. Paul says audio books are about to come out. Paul is planning to add features to his website, including full eCommerce. Now that Paul is seeing the power of a professional website, Paul wants to search engine optimize the site to draw in readers who don’t necessarily know him, yet like to read American Western fiction. If the successes we see every day at iNET are any indication, who knows where iNET website search engine optimization will help Paul Colt go. We may all be watching one of Paul’s books in a movie theater soon!

While Paul Colt's website is smaller and simpler than many, it does feature a database management area where Paul can change any of the content on his site. That is the beauty of an iNET Custom Creative Genius inspired website marketing solution. The website can and will grow over time as Paul writes more books or potentially screen plays or ????

Check out the website. If you like Westerns and don’t already know Paul Colt, order one of his books and prepare yourself for a trip to the old west where history and Paul’s own creative genius blend together for an American Old West Adventure.