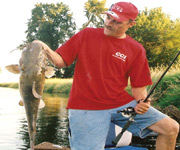 When syndicated outdoor columnist and field photographer Dick Ellis, founder of On Wisconsin Outdoors, came to the creative genius inspired iNET Web Milwaukee web designers and developers he brought with him a vision. On Wisconsin Outdoors has a circulation of over 50,000 and Dick wanted a website capable of matching the quality information and content his magazine printed. iNET Web’s Waukesha website designers and developers pulled on their best blaze orange hunting gear, strapped on their waders and marched in to the wild internet wilderness to bring back a prize website worthy of On Wisconsin Outdoors.

iNET Web’s Waukesha website designers, developers and copywriters worked together to brainstorm the perfect website for Wisconsin outdoor enthusiasts. After weeks of baiting hooks, setting lines and carefully tracking our prey, the professional iNET Web Milwaukee website designers and developers were ready for the start of their own form of open season.

When people first visit the new On Wisconsin Outdoors website they’re greeted with an iconic image: the sun setting over a pristine northern duck hunting lake with two faithful hunting dogs waiting patiently to retrieve their master’s catch. These banner images change as viewers move through the website, cycling from pictures of hunters with fresh kills, anglers holding up their catches and people enjoying the great outdoors. These instantly identifiable pictures draw the attention of website viewers and urge them to forage deeper.

The highly interactive On Wisconsin Outdoors dropdown menu bar sits in a dark area of the banner image. This location flows naturally with the image and doesn’t interfere with the natural beauty. Each of the dropdown bars focus on a specific area of Wisconsin. From fishing and hunting to exploring Wisconsin and expert tips and news from Dick Ellis, On Wisconsin Outdoors provides the information outdoors men and women need to bag their big buck, land a whopper or explore their own backyard.

On Wisconsin Outdoors new website features an interactive scrolling flash function showcasing issues from 2007 to the present. This feature allows visitors to hunt through past editions, each of which links to a PDF containing the full issue, cover to cover. No need to use duck calls or deer scent to find an elusive issue containing the info a visitor is looking for.

The On Wisconsin Outdoors website features a Wisconsin state map detailing hunting, fishing and outdoor activities throughout Wisconsin county by county. Every county is packed full of interesting information feeding outdoorsmen and women enthusiasm for hunting, fishing and outdoor activities. This excellent tool is capable of being updated at any time to go along with the change in hunting season thanks to Genesis, iNET Web’s custom designed online content management system.

While On Wisconsin Outdoors provides great information to hunters, fishers and outdoorsmen and women, it’s also a venue for the Dick Ellis Blog. Dick Ellis has spent the last 25 years writing syndicated outdoor columns for newspapers and decided, in January of 2012, to focus on publishing On Wisconsin Outdoors and maintaining his new website. Genesis allows for Dick and his writers to update their website with new articles and content whenever they want, making for a dynamic and interesting source of information for their fans. With Genesis, On Wisconsin Outdoors will never be left waiting in their treestands for updated content.

iNET Web’s Milwaukee website SEO specialists spent time studying the lay of the land within On Wisconsin Outdoors. iNET Web’s Milwaukee SEO specialists packed the website’s coding and meta information with search engine optimization, ensuring website visitors at On Wisconsin Outdoors would be provided with a bountiful hunt no matter what they were searching for.

If your website needs a new profit hunting license then call the creative genius inspired iNET Web Waukesha Website designers, developers and copywriters today. iNET Web’s Milwaukee website designers, developers and copywriters can bring your business to new hunting grounds and provide all the tools necessary to land the big, profit-stuffed behemoth you’ve been after for years.