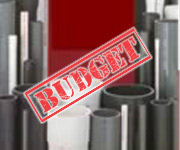 Modular Piping Supply handed us a couple fliers and said "Make it look like this."
iNET said "No Problem!"

Two days and $490 later, the Modular Piping Supply website is up and running. While the Modular Piping Supply website is not much to look at as far as extensive graphic design, what you can't see is the custom website code which makes website content fully accessible to search engine spiders. While a website with such sparse content is unlikely to ever achieve high search engine rankings, with an iNET custom coded website platform, it's at least possible. With second tier web dudes who give their clients template websites, the search engine can't even read what's on the page, making high search engine rankings IMPOSSIBLE to achieve. Even the lowest priced budget website design at iNET is superior to the website platforms offered by second tier Milwaukee website developers.

Hopefully, in six months you will come back to iNET-Web.com to view the new website development successes. We hope you will see an entry for a NEW Modular Piping Supply website, dominating search engine listings for "piping supply" queries and making them more profitable than they ever dreamed. However, sometimes all iNET website development customers want from us is "fast and cheap" budget website design, and to stop getting ripped off by their second tier Milwaukee web development company. No Problem! iNET budget website development is faster and cheaper than the second tier web dudes. iNET provides the lowest cost for functional and non-template websites, which have the potential to succeed on search engines. So, when iNET website design customers decide they want to upgrade to a creative genius inspired website marketing platform, giving them an endless pipeline pumping profit into their company and growing their business, iNET simply says, "No problem!"