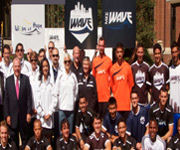 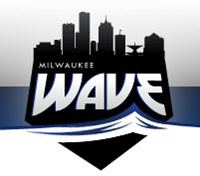 On top of redesigning the Milwaukee Wave logo, iNET Web’s Milwaukee web designers and developers beautifully constructed a Wave of Hope logo, brushed with a rigid finesse, as if hand-drawn by a precocious child. The yellow sun stroke radiates above a healthy green leaf, with navy letters riding a gentle wave. The flash rotator and series of in-article fixed images have been combined with enjoyable information from iNET Web’s Milwaukee web copywriters and SEO specialists. The grand achievement has been inspiring fans throughout the community to step up and support the youth-centered cause of health and wellness promotion. Helping a charity means proliferating funds with rising donations – check.

The more information there is, the easier the access should be. Slow-motion action shots on the homepage encourage interaction. On every page within the site, a navigational sidebar grants users one-click convenience in purchasing tickets, viewing game schedules and signing up for Milwaukee Wave camps. Advanced ticket options are clearly laid out with a variety of rates, packages and seating maps. The header and footer of every page displays another navigational bar to immediately open social media links in new windows, whether the desired outlet is Facebook, Twitter, YouTube or LinkedIn. A full roster of player profiles is available, with hover states indicating users’ pre-click selection. Tiles for Wave Media, Wave Insider Newsletter, Latest News and Youth Camps all feature slider technology to reveal more specific links when hovering with the cursor. A fixed “SHOP NOW” option at the top right of every page spearheads a more sales-driven site, letting fans know the gear they want is readily available.

While enticing from a visual perspective, thousands of textual words have played a significant role in the Milwaukee Wave’s edgier image. INET Web’s Milwaukee copywriters and SEO specialists loaded every facet of the site with precise keywords for stronger numbers in ticket sales and merchandise traffic, bringing in greater profit. The website’s content, URLs, meta data, images and internal links contain strategic words for an enhanced visibility. Multiple powerpoints arm the Milwaukee Wave business administrators with leverage for camp sponsorship, general sponsorship and even demos of new branding to show other potential sponsors.

An onslaught of other new additions are currently preparing for discharge, including specific game programs, calendars, player cards and stadium banners, a full-blown mobile website with app-like features and usability, as well as frequently updated general fliers and posters. Prominent merchandise options are constantly being added with accompanying media. Original images contribute to customized graphic banners which change from page to page. INET Web’s Milwaukee design and development firm continues to produce captivating radio ads aired on Clear Channel stations and also shoot hilarious state-of-the-art videography to be shown on the Jumbotron. Graphic presentations will be used for digital signs surrounding the U.S. Cellular Arena – inside and outside.

INET Web’s Milwaukee web design and development firm maximizes its versatile department of talents to provide clients with profit-generating websites, top quality advertising campaigns and flawless designs to cover every specific area of your business. No matter how large or small, driving up your ROI remains our #1 focus.

Contact iNET Web, the best web design and development company in Milwaukee, or call at 262-574-9400 to set up your meeting for a profit-generating website. iNET Web, improving the economy one business at a time ®.