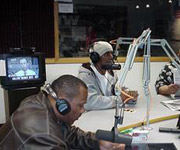 Milwaukee Talk Star design and development was an ongoing website design and webstie development challenge. Every day, new ideas for website features (requirements) were brought forward by the WISN staff. Custom features included a secure voting log, allowing one vote per listener, per day, with no ability to cheat. iNET Web development database programmers built a custom voting module that blocked the IP address of the site user after their vote was cast. After the radio show host winner was announced, speculation as to how a liberal could win on a conservative talk station led to rumors of a conspiracy to get out the vote on the liberal side. Was it smokes for votes or lunch for votes or bucks for votes or just liberals going to different voting terminals and voting a second or third time? In the end, reviewing the complex website database logs, the iNET website online database team wrote into the website voting feature, it looks pretty clear there was no fraud and the contest was pretty close.

Some other cool web site features included in the Milwaukee Talk Star website are streaming audio clips and a custom website database edit area that allowed for the WISN staff to securely log in, add, copy, or change content on the site. The WISN non-website programmers were easily able to add/remove sponsors, notify potential contestants, run surveys to track listener interest in the website based contest, move the winners forward in the contest bracket, change the text on all pages, see where website users were coming from and much more.

The Milwaukee Talk Star website is a great example of the flexibility working with a real Milwaukee website design and development company affords you as a website development client. iNET Web will turn on a dime, exceeding your ever changing requirements, never pushing you into a template or cookie cutter looks like every other website web site.

The interesting dynamic on the web site was that iNET, as a partner with WISN, made an open ended commitment to be on call, doing immediate modifications or changes to the website for the duration of the contest. The changes were features or reports or surveys, not adding a picture or paragraph. The Milwaukee Talk Star contest was a fun website to be part of! Now that the contest is over and the winner has faded back into obscurity, the site is no longer active. The look and feel of this web site changed constantly over the months it was up and running. The link on this website success is just a sample of one point in showing what the site was then.

When you need a website solution please consider the website development company News Talk AM1130 WISN put their faith in when they needed a dynamic web site solution from a company that could get the job done quickly and right. WISN didn’t choose your ‘mother's brother's cousin twice removed or a jaded wannabe,’ WISN knew iNET Web was the best choice for their dynamic Milwaukee Talk Star contest website development.