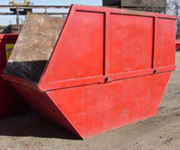 iNET Web gave Jim another great innovation unheard of by second-tier Milwaukee website development companies. Like all iNET websites, we gave Madison Dumpster Rental our custom developed iNET Web client-side online content management system called Genesis. Genesis enables Jim to update the content on his website however he wants, whenever he wants! Jim can add Madison Dumpster Rental specials, change dumpster rental pricing, and introduce new services whenever he wants. Genesis is as easy to edit as a Microsoft Word document, so Jim really can do it by himself! And with Genesis online content management, you will never pay fees to update the information on your website. Tell that idea to second-tier website developers and see what they think! iNET Web’s Genesis site-edit program gives you the power to run your website like you run your business, with all the support of our excellent creative genius team.

Are you ready to improve your business and experience the iNET difference? Have you been handed a hack job website by some second-tier wannabe? Template websites and apathetic wannabe workers cannot bring your business to the top. iNET Web’s team of creative genius Milwaukee graphic designers, search engine optimization specialists, and technical professionals will work untiringly to bring your business success! Choose iNET today and experience better business, the iNET difference.  Contact iNET Web, improving the economy one business at a time ®.