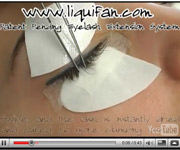 Nova was nervous coming into the video production process, but iNET Web worked with Nova to produce a great custom creative genius inspired iNET website video, adding an attention grabbing, show stopping website marketing piece. "I was very nervous about shooting a video. I have never done anything like this before, so I didn't know what to expect. Brian made me feel very comfortable and was an awesome coach." iiNET Web's videographer, Brian, coached Nova and helped him gain confidence with his lines, resulting in a highly successful website marketing video.

After the footage was shot, iNET web developers immediately began editing the video content to fit Liquifan’s marketing web video needs. iNET Web produced the perfect marketing video for Liquifan and worked with them on adding final touches. Liquifan loved the initial website video produced by iNET but wanted the text font in the video to match the font of their logo. iNET found the font they wanted and incorporated it into the video to give Liquifan a Custom Creative Genius inspired website video with every detail matching their exact desires. "I have to say I was also very surprised how fast I got the first draft of both videos, and how accommodating he was in customizing each video to what I needed!"