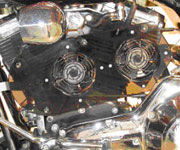 The start of the website design was the graphic building of a representative logo. The logo is a conceptualization by Dale that the iNET creative genius inspired graphic design team brought to life. The logo is a draw from the Harley Davidson sub culture concept; beautiful women make motorcycles even more fun. The logo has a throw back to the 1940’s or 1950’s feel to it. Those days, having a Harley Davidson motorcycle literally meant you could go places and experience things on the American roads few other people could. The logo even has a tinge of the logo images painted on the side of American bombers in World War II.

When asked how the website is doing for Kool Juggs Dale said, "My customers love the amount of content and the functionality of being able to customize their Kool Juggs on the website. I love and my customers love the design as it is cool and unique." Dale says he even has one company wanting to lease his patented idea after seeing the site!!! (That may be the golden egg of the Kool Juggs website.) Dale also said, "I liked working with iNET Web every step of the way through website development." Dale also says he loves how easy it is for him to edit the Kool Juggs website without help from anyone. Now that the site is going out and getting the job done, Dale is thinking about doing iNET search engine optimization to take Kool Juggs to the next level.

The Kool Juggs site features eCommerce and has a custom website content management system. The database content management system literally makes it simple for Dale to work on his web site any time, anywhere he can get an Internet connection. On the eCommerce side, Kool Juggs has a nice little web marketing feature. If a site viewer refers another Kool Juggs buyer, they receive $10. This has been a great tool in motivating website visitors to spread the word.

Take a look at the Kool Juggs website. If you have ridden a Harley Davidson motorcycle, you have experienced the rise of the engine heat up your body and into your face. Excessive heat generated by the engine when riding slow and a sudden drop in oil pressure that occurs can cause engine damage due to the overheating of the oil and the loss of lubricity. This overheating can lead to expensive repair and loss of riding time. A Kool Juggs cooling system is a cool way to customize your Harley Davidson, and it the least expensive insurance policy you can buy to assure your bike stays running on the hottest summer days, when the wind in your face and the freedom of the road feels the best.