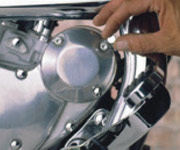 Before Hot Toppers came to iNET, they had an existing website.   The site wasn’t being found in search engines and didn’t have e-commerce or client side editing capability.  The Hot Toppers Chrome motorcycle bolt cover team they liked the look of it and wanted to salvage part of the investment made with their first website designer. Like most web site developers their old site developer didn’t understand how or care to make websites profitable for their client.  iNET Web took the existing Hot Toppers Chrome Harley Davidson motorcycle bolt cover website, converted the code to be search engine friendly, and put it into our client side website editing database, giving Hot Toppers ability to update website content themselves.  iNET recently added a Flash graphic website animation over the home page, showing Hot Toppers chrome motorcycle bolt covers sliding over a variety of Harley Davidson motorcycle bolts to instantly demonstrate to website viewers the aesthetic improvement Hot Toppers bolt covers make for motorcycles.  With e-commerce programming and a full online store the Hot Toppers website is often tallying large and complex orders, and allowing clients to pay online with their credit cards, keeping their information completely secure. Their website e-commerce platform has saved Hot Toppers sales staff lots of time, as many of their clients who previously placed their orders by telephone now prefer to order online.  For any business there is nothing like showing up for work in the morning having made thousands of dollars in sales.  For iNET customers like Hot Toppers that is exactly how many days begin.  iNET web sites reach out and acquire customers for our business clients at the highest level possible. 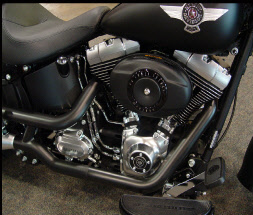 After iNET converted the Hot Toppers Harley Motorcycle chrome bolt cap website code to be easily indexed and categorized by search engines, it only took a moderate amount of search engine optimization (SEO) from iNET to get Hot Toppers to start dominating Google listings.  Like virtually every iNET website customer Hot Toppers went from being nowhere with their old website to being found on search engines at the highest levels with their iNET custom creative genius inspired website.  Every month, hundreds of people search for bolt covers, Harley bolt covers, motorcycle bolt covers, chrome bolt covers, and all of them see Hot Toppers as the first or second site listed on Google when they do.  What does that mean for Hot Toppers???  PROFIT!  Hot Toppers is reaching new clients across the world with their iNET custom creative genius inspired website solution, and seeking to invest more money in SEO with iNET, to increase the motorcycle accessory terms they get found for, bringing them customers who had no idea Hot Toppers bolt covers were what they were looking for.  iNET will get the job done increasing profitability ongoing forever for Hot Toppers.

The other major return on investment boosting feature of the Hot Toppers website is iNET client side content management capability, allowing Hot Toppers to control a huge bolt cover product database, a .pdf database of installation instructions for customers to download, and a huge motorcycle picture database where Hot Toppers uploads photos of client motorcycles from around the world. If Hot Toppers were to pay a web design company to make all the website additions they enjoy instantly and easily with iNET client side website content editing tools, it would literally cost them thousands of dollars a year. Most web development companies develop to build themselves that kind of revenue stream.   At iNET we prefer to boost our profits by boosting our clients’ profits, getting them to do more and more business by choice as we make them more and more money.