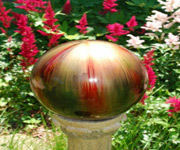 Before iNET Web could deliver a profit generating web marketing solution to Garden Gazing Globes, Patti was stung by the thorn of a different Milwaukee website development company: sticking her with bills and the pain of not delivering measurable results. Patti spent THOUSANDS only to have hack job Milwaukee website “designers” sell her “the tools to build her own website”, more accurately described as shoddy template software incapable of delivering the results she needed. Templates are unable to produce the unique coding structure necessary for top search engine placement. Without search engine rankings presence, Patti’s potential customers would never find her.

Worse still, her template website looked awful and generated no extra business. She went back to the second-rate Milwaukee web development company to discuss the shortcomings of the do-it-yourself template program, only to have them charge her again, AT DOUBLE THE ORIGINAL PRICE, for “additional independent design.” The expensive re-design was still substandard and offered nothing in the way of harvesting more business. On her experience with the other Milwaukee web development company, Patti said “I spent a lot of money for NOTHING.”

The SEO specialists worked in conjunction with the designers and copywriters to come up with search engine friendly coding, structure and content at levels totally unreachable by “insert company name here” templates. Template website designers usually employ template content, oft-repeated all over the internet. Google rightfully penalizes the duplication. Without exclusivity, any product will fail to be THE search result needed to produce profit generating, measurable results.

The new logo is designed around Garden Gazing Globes’ signature products themselves. iNET Web’s graphic design team formed the logo around a glossy green gazing ball, colored in gradient to show depth. Inside, a perfectly placed leaf stencil forms the “G” in Garden. This highly functional gazing ball “G” sits atop a minimalist representation of a stand. iNET Web’s creative genius inspired designers augmented the “G” symbol with the company name in a tastefully selected font to perfectly comport with the feel of the logo and overall website. We’re especially proud of this logo’s ability to directly convey the specialty Gazing Globe product to its seekers.