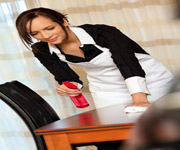 iNET Web’s professional Milwaukee website designers decided to feature the logo prominently in the upper left hand corner, establishing authoritative branding for Eagle Enterprises. Using the logo’s color scheme in the trim created a unified, full appearance. Placing a silhouette of the eagle elsewhere on the page created an asymmetrical balance appealing to even an artist’s trained eye.

iNET Web’s expert website design team employed a calculated approach to white spacing to brand Eagle Enterprises with a feeling of crispness and cleanliness. The cluttered, busy appearance of a second-tier Milwaukee website developer would have been totally inappropriate. iNET Web outfitted each page of the new marketing platform with an attractive and recognizable Milwaukee lakefront skyline, saturated in both white and the newly defined “Eagle Enterprises blue.”

Measurable studies have proven pictures of people hold the attention of website viewers far more effectively than snazzy design alone. The image of the man who greets prospective Eagle Enterprises customers encourages action by conveying an attentive and firm personality. He is professionally clad in the newly established colors of Eagle Enterprises, and he looks like a man who gets things done. All of this communication was expertly crafted by the experienced Milwaukee website design professionals at iNET Web.

At iNET Web, we mop the floor with the competition, and we want to make your business do the same. Experience the benefits of a total web marketing platform. iNET Web delivers measurable results and online profitability. Call us today: 262-574-9400.