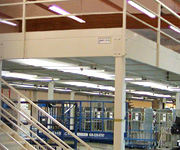 Cubic Designs' first goal, "To get a major facelift of the site to get more visual impact while retaining a professional image", was a guaranteed win for the iNET creative genius inspired web design team. When Cubic Designs came to iNET they had a simple, graphically static and somewhat bland website, not setting them apart visually from lesser mezzanine design companies. The iNET web development team brought the Cubic Designs website to life, adding depth, color, and an eye catching Flash animated picture rotator. "The changes that iNET helped us achieve in the look and feel of the website were significant, and the visual impact is tremendous. We had several different options from which to choose, all of which were very good, and the final look has received compliments from customers, suppliers and employees." Cubic Designs originally had three completely different websites, one for each main area of service, diluting their brand value and the potential search engine value of their website. The iNET web development team combined all three websites into one site, making all Cubic Designs' services and information easily found by visitors and consolidating the websites' value. The iNET Milwaukee web design geniuses used drop down menus to group information from each of the websites, keeping everything organized and easy to navigate. iNET SEO specialists used automatic redirects to preserve the website value and incoming links from the old Cubic websites. This ensured combining the websites was an SEO enhancement rather than a loss of value.

The second goal of Cubic Designs' new website, "To gain more in-house editing control for minor content changes and additions" was easy, since iNET provides user-friendly online website content management systems for all our web development customers. This iNET management system allows Cubic Designs to easily edit and add text, photos, white papers and pdf files. The Cubic website also has several custom photo galleries where they can categorize and build links to pictures and descriptions of their mezzanine design and installation work. "We love the flexibility of the iNET site edit feature that allows us to easily make changes or upload new content any time that we want." With other Milwaukee web designers and developers, Cubic would experience extra billing and waiting time for even the most minor changes, OR be stuck in a template website content management system, stifling their search engine success. The iNET website content management system allows for Cubic Designs to make website changes easily and instantly.

Cubic Designs' third goal was "To increase the level of SEO that we had already attained at that point." When Cubic Designs came to iNET, they were already being found at #2 on Google for "mezzanines", the broadest and most desirable term in their industry. So how much better could iNET really do? How about boosting the number of new visitors finding the site through search engines by 60% within three months of going live! "Since we already started with a content-rich site that was somewhat established with search engines, we expected to see a drop-off in SEO results when we made the switch over to iNET. That wasn't the case..." Like many companies who are already experiencing search engine success, Cubic Designs naturally had some concern about losing their current results when they put the new site live. Like other iNET customers in their situation, Cubic Designs has experienced the speed with which iNET can improve the search engine results of a website already seen as important by Google. So how did iNET give such a large boost to a website already doing so well? By finding secondary search terms with good volume and room for improvement. These are new search terms Cubic is now on the first page of Google for and was not being found for previously. In fact, since the new site has gone live there has been a 692% increase in visitors finding the site for steel related terms. Before the iNET web marketing and search engine optimization team took over, Cubic Designs was also getting light search engine traffic for their industrial safety products. Cubic Designs has now seen a 290% increase in safety product related searches. With ongoing SEO, Cubic Designs will only continue to climb to the top of free search engine results.

If you are looking to double or triple your floor space at a small fraction of the cost of new construction, call Cubic Designs for all your custom mezzanine flooring needs. If you are looking to double, triple or exponentially increase the profitability of your marketing dollars with a creative genius inspired website bringing in new leads on a regular basis, call iNET today to meet the creative genius inspired web design and development and marketing team who will make YOU more profitable.