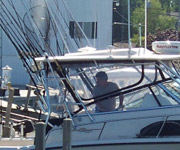 Captain Claude liked the design his son and fellow charter fishing captain Mike Ouvrard had developed in Microsoft Front Page. Claude started his relationship with iNET Web wanting to spend as little as possible on the web site and just wanting to have the website found in searches. Oh yes, and he wanted some of the broken pages and graphics on the site fixed while iNET Web was working on it as well. You see, Captain Mike did a bang up job developing the website in Microsoft Front Page, for a guy who never did a website. The problems with Microsoft Front Page are many and regardless of how hard a novice website developer may work to keep them suppressed, they always seem to pop back up. In the case of the Catch Five Charters website, it was broken fields and pages looking different or more broken for different internet browsers. Captain Mike was a full time student and eventually got tired of chasing the ghosts of Microsoft Front Page, so Captain Claude came to iNET for help. For iNET, the inability of the previous website to win on free searches because of template web design was the biggest problem.

While the Catch Five Charters team was fairly happy with the look of the website they had, it was impossible for Claude to add content and, as a full time student, Mike had a hard time finding the time to keep up with content and fixes. Claude wanted iNET to fix the website and search engine optimize it. When Catch Five Charters started with iNET, the site, like so many template websites, was completely ignored by search engines. You could not find Catch Five Charters in any search of keyword related to Door County, Charter Fishing, the Ouvrard’s or anything else. The only way you could find the site was to know their domain name. At iNET, we see these sites everyday and it kills us to know that local businesses are getting this level of development from website developers who claim to be professional. In the case of Catch Five Charters, it was the best a novice developer could do. The iNET custom creative genius web design and development team convinced Claude that there was no profitability in going forward with the Microsoft Front Page site if he wanted the website to generate new customers and income for their Door County, Wisconsin charter fishing company.

INET worked a custom website content management area into the Catch Five Charters budget. Claude committed to a little more than he had hoped to spend and iNET was working on our usual razor thin margin to get a profitable for our customer website development job done. An iNET website design specialist took the Microsoft Front Page site Mike had created and turned it into a real website with perfect custom coding, developed as all iNET websites are, to show the site as a high value resource for search engines about our customers business. iNET reworked the image galleries and did only the most basic search engine optimization right off the bat. For the iNET creative genius web design and website development team, the most important consideration to the long term profitability of the Catch Five website was getting them out of the template coded site. Both Captain Claude and iNET agreed that on the minimal budget, more search engine optimization would have to wait until the site started to prove its merit.

The Catch Five Charters website quickly proved the merit of iNET expert website development, superior coding, expert search engine optimization and our proprietary website design and development methods. The website immediately made a move on all of the major search engines for Catch Five chosen keywords. In just a few months, Catch Five Charters was on the first page for a few target key word searches on Google. The generation of new customers and profitability immediately started to take place. Confidence in what Captain Claude had been told by iNET took hold and Catch Five Charters had iNET do a little more graphic tweaking to the site and little more search engine optimization.

Captain Mike Ouvard has started to maintain and add content to the perfectly produced for search engines iNET Catch Five website and the site has taken off. The site is at the top of free internet searches for Baileys Harbor Charter Fishing and Door County charter fishing and all of the rest of the terms that potential Catch Five customers would use when trying to find a charter fishing boat and captain in Door County Wisconsin.

People often wonder, just as Captain Claude of Door County’s premier Charter fishing company did, does getting to the top of free searches on the major search engines really generate business like the iNET website design and website development team says it does? Captain Claude definitely came around, having called as the fishing season of 2007 was coming to an end to say he is looking forward to the off season for a break. Captain Claude said the website generated so many charter fishing trips in Baileys Harbor, Door County, Wisconsin, that he was literally booked all summer and had trouble finding helper crew to fill all the trips. That is what we love most about website development at iNET… Helping our customers succeed!

Take a look at the site. You’ll see a clean graphic design and a lot of fish pictures. If you are a Door County regular or just thinking about making a weekend trip to Door County, contact Captain Claude at Catch Five Charters for an adventure aboard the Catch Five III you won’t soon forget.