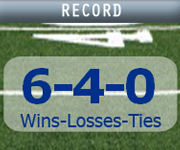 iNET is famous in Southeastern Wisconsin for developing search engine optimized websites which soar to the top of Google listings, finding businesses new clients, and making businesses more profitable. Among the hundreds of websites iNET Web has designed, there are some which have no need to be found in search engines or to bury their competitors.

The Blue Dukes Football website is paid for entirely by donations from team parents and sponsors. With their limited funds, an attractive website with pictures, videos, stats, featured players, news sections and more getting updated on a weekly and sometimes daily basis would have been impossible without some truly creative genius inspired website solutions from iNET web developers. iNET creative genius inspired website graphic designers started it all off with a simple yet sophisticated graphic theme making the Blue Dukes website without question, more attractive than the official website of Wisconsin's beloved Green Bay Packers. The iNET difference is web graphic design rivaling solutions developed for the largest and best known organizations in the world, at prices any organization can afford.

The next challenge for the Blue Dukes Football website was to develop an embedded video area on the homepage to display weekly team highlights. This website video display had to be updated by a father of one of the team members who has no website programming knowledge. An elegantly simple website solution devised by an iNET creative genius inspired programmer lets the Blue Dukes upload videos to an archive page to control which one appears in the homepage highlights simply by changing the

filename. The website homepage also features a "players of the week" section with photos of the offensive and defensive Blue Dukes players of the week, a team record section, where the record is boldly displayed over a portion of football turf, a sponsors section, and several other editable regions where website content is updated regularly by the Blue Dukes football club.

The Blue Dukes Football players and fans love checking out all the video highlights, pictures, and statistics added every week on their website. Parents love the online web based calendar which lists all current football team practices, events, and functions, always keeping them in the loop. A photo gallery feature automatically creates a separate web page with editable text for every coach and every player on the team. There are so many pages and features on the Blue Dukes website, they haven't had time to take advantage of all of them. As the Blue Dukes take the off-season to continue developing content, their website will become a real tribute to the legacy of Whitefish Bay football. If the Blue Dukes had gone to an average Milwaukee web developer, the price of updating their content over the season, after the site had already been developed, would have been more than the total iNET charged them for all website development combined. Without iNET client-side website content management tools allowing for free, unlimited website updates, the Blue Dukes website would simply not be possible. Perhaps this is why the Blue Dukes website project stalled for several years, until a parent determined to finally get it done, brought it to iNET, and got an affordable Custom Creative Genius inspired website solution.