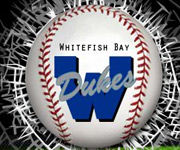 "You guys did our original website so I called and kept working w/ you," says Chuck, the Bluedukes Baseball coach.  "The overall production process with iNET was great.  They made it to state this year, so let’s take credit for that!!  Players, fans and parents love the website.  The Blue Dukes website has brought the team increased exposure."

With iNET Web’s Waukesha graphic designers accentuating each blade of grass and ripple of dirt with striking detail, website viewers cannot resist the temptation to check the Blue Dukes’ schedule for the latest game location, throw on their favorite sports jersey, and hurry off for the playing field to enjoy explosive Blue Dukes baseball!

The Blue Dukes coaches gave iNET Web’s Waukesha graphic designers the go-ahead to round third and head for home with graphic design as equally functional as it is eye-appealing.  An interactive scoreboard stands tall on the field prominently displaying the Blue Dukes current standings.  The scoreboard seamlessly displays the Win/Loss record of each Blue Dukes’ division -Varsity, JR Varsity, and Freshmen- in one simple click.

Fuse vibrant, functional Waukesha graphic design with iNET Web’s exclusive online content management system, Genesis, for a website ready for extra innings!  Genesis allows the Blue Dukes Baseball website’s administrators to upload, add, or delete content from Blue Dukes Baseball website without any assistance or additional cost from iNET Web.  Adding new Blue Dukes’ photos, videos, and articles to the multi-media gallery is as hassle-free as walking your way onboard the bases.  Genesis puts the ability to easily update team stats and schedules right in the Blue Devils’ mitts.  Whereas unscrupulous wannabe Milwaukee web developers will charge you doubleheader rates for the simplest change, Genesis provides you the out-of-the-park freedom to do with your website as you wish.

There’s something off base about other wannabe Milwaukee website developers.  What they call profitable website ‘solutions,’ iNET Web –MVP Champions of Profitable Milwaukee web design- calls just a bit outside.  Don’t strike out with a minor leaguer’s template, pay-per-click online marketing solution.  Crank it out of the park with an iNET Web custom creative genius inspired website solution bringing home the big trophy.