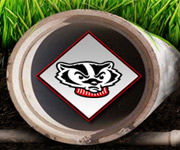 I’d heard lots of other guys on the radio advertising to sell me a website,” Jeff says.  “Something about the persistency and creativity of iNET’s radio ads just hammered it into my head to choose them.  I’ve received calls that’ve lead to new business within a couple months of the website going live.  A nice man I bought a truck from said I had a real nice website.  And I’m not much of a computer guy, but this website is so easy to use!  I’m pretty happy with it.”

Compared to the content management processes employed by other “wannabe” Milwaukee web developers, Genesis leaves them stuck in the mud. “Wannabe” web developers leave website owners with no direct control over website content. Instead, owners must wait and pay updating fees for any completed work. Just as Badger Underground walks through every sewer repair and replacement with their clients, iNET-WEB gave Badger Underground a Genesis training, ensuring all the provided features are understood for maximizing their online profitability.