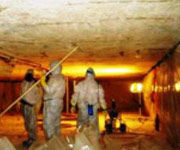 Now that a real, profit generating iNET web marketing solution is in place, American Air has canceled all their Pay-Per-Click ads – saving $2500 a month – and getting MORE quality leads EVERY month with NO ongoing expense! After seeing their return on web development investment for the initial phase of their web marketing platform, American Air Improvement Resources is looking to invest more money in ongoing search engine optimization. As many iNET Web customers learn – some faster than others, depending on their initial level of jadedness from dealing with second tier web developers – the more money you spend on an iNET website, the more PROFIT your website brings you, ongoing FOREVER.

When residents of Milwaukee and Chicago find American Air Improvement Resources on the first page of Google for terms like "Wisconsin mold removal", arriving at the website is like a breath of fresh air. A wide open website navigational structure with pictures of blue skies and air improvement contractors at work gives the instant impression of a top quality asbestos and mold removal company capable of permanently improving indoor air contamination. The Waukesha web design of American Air goes beyond "outside the box" – there is no box! Unlike the template, look-alike web design of nearly all other website design and development companies in Milwaukee, at iNET your website design represents YOU, not some arbitrary design standard your web developer has adopted to refrain from thinking or stretching themselves in any way or to simply maximize their profitability at your permanent expense.

Of course the reason American Air's website graphic design is important is because people are actually seeing it. Getting on the first page of Google for mold and asbestos removal in literally hundreds of municipalities in Southeastern Wisconsin and Northeast Illinois is bringing American Air some serious website traffic. 'That's the power' of search engine optimization from iNET Web. American Air is also bringing new customers to the website through their automated e-mail marketing campaign which iNET helped them set up. "iNET was a tremendous help in implementing the e-mail campaign – there's no way we'd have been able to do it ourselves."

If you ever have a mold or asbestos problem you need inspected, call American Air Improvement Resources for a FREE removal estimate complete with a 15 year transferable warranty against recurrence! For a warranty against bottom line draining monthly recidivism marketing, come to iNET Web, where your web marketing investment makes you more profitable NOW and FOREVER - not just until the end of the month.