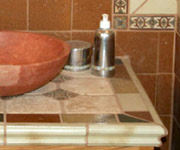 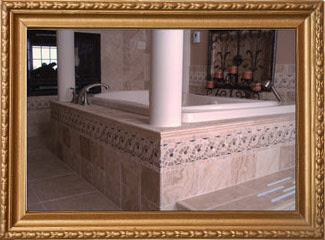 21st Century Tile wanted a work of art as their Internet marketing platform; something representative of the beautiful ceramic and stone tile layouts 21st Century Tile design for their Milwaukee tile customers. iNET creative genius inspired website graphic designers came through with a truly gorgeous website graphic design incorporating subtle elements of tile imagery to give viewers the intuitive impression of a high-end, quality ceramic and stone tile supplier. A Flash graphic animation in the homepage header fades opaque windows out in a square tile pattern. As the windows fade, pictures of home interiors featuring 21st Century tile design shine though. The background of the website is a mosaic tile pattern which expands to fill the browser of the website viewer. The tile pattern is attractive and seemingly simple, yet subtly complex, as multiple patterns can be seen within it. The color scheme of the website graphic design is warm and soothing, inspiring the relaxed and comfortable feelings 21st Century tile designs create in Wisconsin homes. One of the coolest features of the 21st Century Tile website is the Virtual Showroom. The virtual showroom is an online gallery incorporating Javascript and Flash programming to let viewers browse images and tile samples from the 21st Century Milwaukee tile showroom. Large, glossy pictures of 21st Century tile samples, representing their wide range of tile materials, rotate in a suggested 3-D circle. Sample pictures fall into the gallery from above each time a new category is selected. When individual pictures are clicked, enlarged versions fade in over the website then fade back out again when closed. The 21st Century Tile Virtual Showroom is one of the most advanced and most attractive website picture galleries you will see anywhere.

With iNET client-side content management tools, 21st Century Tile can add and subtract pictures to the Virtual Showroom, as well as edit content on all areas of the website. Website changes are made instantly and as easily as sending e-mail. While lesser Milwaukee website developers prefer to charge clients for every website update, at iNET we like to encourage our web development clients to keep their website content fresh all by themselves if they want to keep cost to a minimum. While there are dozens of proprietary methods iNET Web uses to push websites to the top of search engines, fresh website content is one way the average website owner can help their own websites rank higher in search engine results, thereby increasing web development return-on-investment, which is what iNET Web is all about.

To transform your Wisconsin home into a work of art, visit the 21st Century Tile website today to see examples of the gorgeous stone and ceramic tile designs available. To transform your Wisconsin business website into an online sales generating, profit building marketing machine, visit iNET Web – where bottom line enhancing website development artistry is what we are.